Four days was he deliberating upon what name he should give him; for as he said himself, it would be improper that a horse so excellent, appertaining to knight so famous, should be without an appropriate name. … he finally determined upon Rocinante (Rozinante),  a name in his opinion lofty, sonorous, and full of meaning…..

I had no idea to tilt at windmills but had an idea I might go to La Mancha on the hot Spanish plains to see where the mythic monsters live.  My steed was to carry two and it would be named Rocinante 6. Rocinante was the name Cervantes gave to Don Quixote’s horse. It was the name John Steinbeck gave to his camper in his book Travels with Charlie in search of America and it was the name I gave to my first camper – Rocinante 3 to be fair to the previous users. Now we have Rocinante 6 my latest and best camping-car /motor-home/motor-caravan. 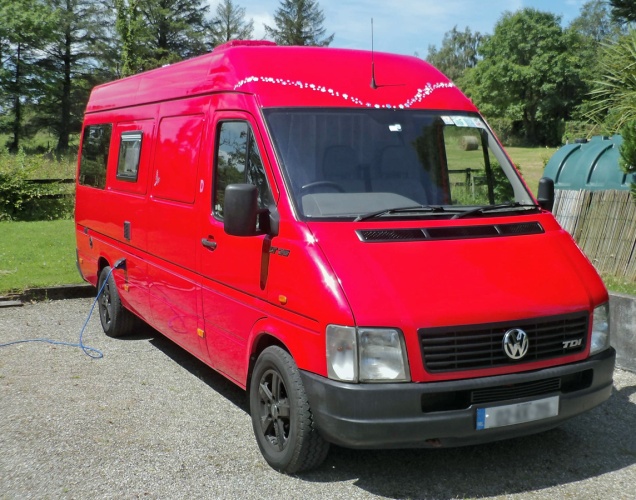 There is some disagreement about the spelling for the Don’s mount, I’ve seen it rendered with an S rather than C and a Z too. How so ever it’s spelt; it’s the idea that counts. The noble and faithful mount that carries it’s knightly and grandly deluded rider on his adventures and his final doomed tilt at a monstrous windmill.

A knight errant without a mistress was a tree without fruit or leaves and body without a soul.

My mistress was to be the ‘beloved B’. Brigitte shared my dream of romantic wandering over unknown lands filled with sunshine and lacking the rain so… always here, in Ireland.

Our Rocinante 6 was a long time in the finding. Beloved B and I having decided we wanted to spend some retirement funds on a vehicle for our dreams – dreams of adventure and exploration – mini-ventures locally here in Ireland – midi ventures here and the UK for longer periods and maxi-ventures to continental Europe. Close encounters with windmills would be avoided and no lance would be carried.

Much research and one false start led us to this bright red VW LT35, beautifully fitted out with exquisite carpentry by a fastidious enthusiast. It is not conventional in that it is all electric – no gas fridge or cooker. This means either an electric hook up in a camp site, a small portable gas stove or – we get out the 3kw generator hiding under the big box inside the side door.  (This was my way of giving us freedom to camp almost anywhere.) All though called silent, the generator running makes enough noise so we would not want to stop near other campers.

Rocinante 6 is the right size for us, big enough not to be cramped inside. We can leave the rear bed made up and still have a table to eat at and plenty of space to work at cooking and cleaning. It’s narrow enough to negotiate little mountain roads and easy enough to park. It is comfortable to drive and very fast but the economy is good too. All camper vans are by their nature a compromise but this one has the right balance of compromises for us. However, a few short trips showed us some mods were needed to the bed arrangement. My six two frame would not fit – so some woodworking was needed to extend the bed. It now sleeps two long folks in great comfort.

Rocinante’s maiden maxi-venture was planed for June/July – 32 days in France and Spain. No actual route plans were made. We would land in Cherbourg and head southish – that was the extent of the planning.

In the next blog I’ll get into the actual travel and waffle about the philosophy of looking and touching the new.