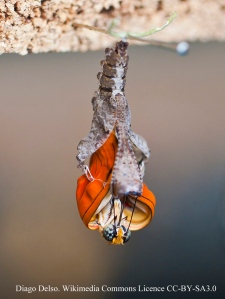 I’ve been in social media hibernation for almost six months. But I’ve emerged from my chrysalis: The Butterfly Effect Trilogy is reborn with a whole new plot line and new energy. This will be my ‘East of Eden’. My big book, my last big push to get all that’s in me, and all I have learned into a big book. (Well, three books but in my mind it’s one 400,000 word body.)

I intend to use my familiar characters Bonny, Lauren and Daniel to scream my indignation at the world. The themes will be huge and will include all the dangers and threats of East v West. Fundamentalism v Rationalism. Individual v State and above all, the tricks and political veil used to blind us will be lifted for any who cares to see. This will not be a political rant – but rather a subtext in an exciting espionage/ romantic/thriller, literary fiction trilogy.

My hibernation was a deliberate decision and enabled me to recover. It was not a health issue but rather one of creative energy .

In February this year I posted about the crisis I suffered and the drastic solution: http://wp.me/p18yK8-rG. I called it ‘Creative Infanticide’; a rather dramatic title admittedly but it was a dramatic moment in my writing life. I threw away an almost complete novel and stopped the ongoing processes for the two that were to follow in the Butterfly Effect Trilogy.

I was forcing myself down a path in order to keep writing, to keep producing. In the pervious seven years I had been prolific and effective – twenty novels and novella produced. I was trying to get commercial on the last few and write what I thought there might be a market for. I was searching for niches to occupy and I produced a few short things that were worthy but… they were not me. They lacked the passion that usually fuels my writing and drives me forward.

Last night an angry rant about the situation in the Middle East and a comment on friend’s post led to one of those bright-light revelations that has brought me out of hibernation. The big book will start soon. I’m back and I will be posting and engaging with my readers while seeking new ones.